We were only in Tangier because that’s where the ferry docks. Our plan was to take the train to Fez as soon as we arrive in Tangier.

The ferry took us from Algeciras to Tangier Med. The ticket told us that we have to be at the ferry station 90 minutes prior to boarding. We waited for 3 hours before the ferry finally took off. The ferry docked later than expected. Then we had to walk all the way to the bus stop (not signposted, and seemingly no one at the port can tell you), and the bus took about an hour to reach the Tangier Ville train station. The bus didn’t let us off next to the train station (due to the major construction works). We had to walk about 7 minutes to the weird make-shift train station, where there was no pedestrian walk way. It was pretty scary. Then we caught the last train to Fez, that took about 5 hours and a bit. By the time we reached our hotel, it was 12am.

We are never taking the ferry again. Even though it was really nice on the ferry, the views were lovely, I felt that we had to set aside 24 hours for 1 hour of enjoyment on the ferry. If I could have a do-over, I would fly in to Fez/Marrakesh next time.

We did meet a lovely American family on our way into Tangier-Ville, a father, mother and daughter. The daughter was studying Arabic in Rabat on exchange. A lot of American’s go to Morocco on exchange to cement their Arabic apparently. Although, Moroccan Arabic has more of a French influence compared with normal Arabic.

We stayed at Riad Borj Dhab – which was amazing! Noor and Hanane took wonderful care of us, they really treated us like family. Our room had a balcony overlooking the courtyard. It was sort of like an apartment. The Riad people also brought us a cake to celebrate our honeymoon! So sweet!

1. walked through the old Medina, it was very confusing, you need Google maps, solid GPS and a great connection to get around. We got lost heaps, but it was all in the spirit of things. Apparently, it’s very common in Morocco for the locals to tell you that you are going the wrong way, or that road is closed or you can’t go down there, but it’s all lies and you just have to ignore them and keep on walking. Ben and I still cannot figure out why they do that, doesn’t seem like there’s anything in it for them.

2. We went to see the tanneries, it was really smelly, but cool to see their process and walk amongst the dyeing vats. The tannery people are really pushy, they will convince you to see their tannery, give you a sprig of mint to combat the awful smell and they show you around the tannery without you asking – then they hit you up for money.

Fez’s tanneries are composed of numerous stone vessels filled with a vast range of dyes and various liquids spread out like a tray of watercolors. It looks like a cross-section of a bee-hive. The tanneries work with the hides of cows, sheep, goats and camels, turning them into leather bags, coats, belts, shoes, and slippers. It is a mostly manual process, very little machinery is involved.

The hides are first soaked in a mixture of cow urine, quicklime, water, and salt. This mixture helps to break down the tough leather, loosen excess fat, flesh, and hair that remain on them. The hides are soaked for two to three days after which tanners scrape away excess hair fibers and fat (using a wooden beam and a scythe-looking device) in order to stretch and prepare the hides for dyeing. The hides are then soaked in another set of vats containing a mixture of water and pigeon poop. Pigeon poop contains ammonia that acts as softening agents that allows the hides to become malleable so they can absorb the dye.

The hides are then placed in dying pits containing natural vegetable dyes, such as poppy flower (red), indigo (blue), henna (orange), cedar wood (brown), and mint (green). Saffron is used to produce a vibrant yellow colour, however, as it is such an expensive product, the saffron liquid is applied by hand, followed by a coat of olive oil to make it shiny.

Once the leather is dyed it is taken out to dry under the sun. 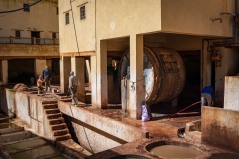 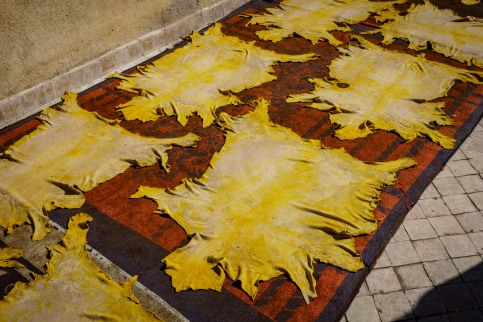 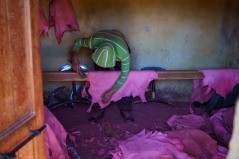 3. We walked to see some of the famous “sites” – but they were not really worth seeing as you are not allowed to enter if you are not Muslim. So you can only stand outside the door and take pictures. Kind of weird.

4. We booked a taxi with Mohammad to take us up to all the view points surrounding the Medina, and to go to the ceramic workshops (we agreed on Dh130 for about 2 hours driving).

Wow what a mix up! We went out into the square to find Mohammad and his taxi. There were about 20 taxis there in a state of confusion. We walked up to a few of them and finally found a taxi with Mohammad in it. We hopped in, and headed off to Borj Sud. As we are driving along, the real Mohammad calls Ben! Oh no! So our driver takes us back to the real Mohammad, he’s not very happy about it. The real Mohammad had got into trouble with the Police while waiting for us. Once we are with the real Mohammad, he drives us to the police station to give a witness statement that we had a reservation with him, and he shouldn’t be in trouble.

We went to see a ceramic workshop – the workmanship in crafting a single tile is incredible, seems almost not worthwhile to spend 2.5 days to make one tile! We bought a salad bowl here – Dh600. I bargained the guy down. While we were there, I had the opportunity to try my hand at some pottery-making! I made a plate.

Our guide Mohammad was really nice, he showed us all the sights. 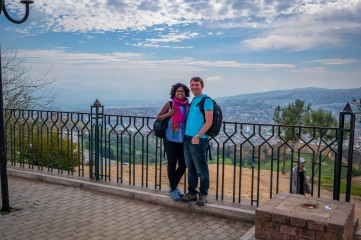 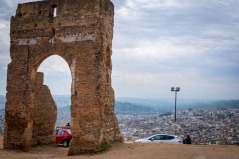 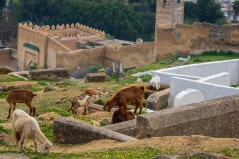 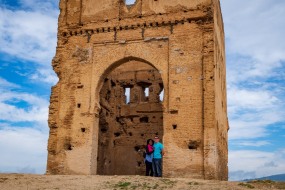 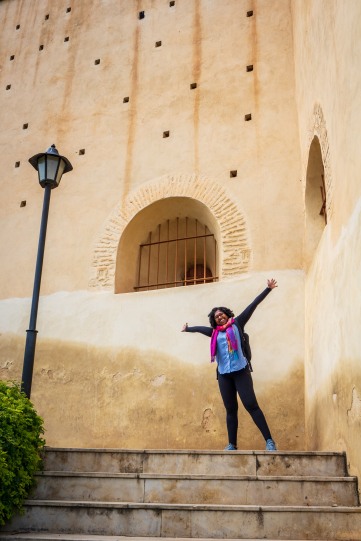 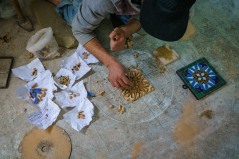 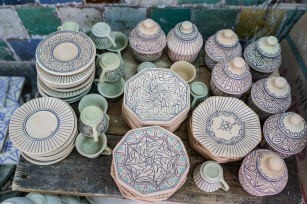 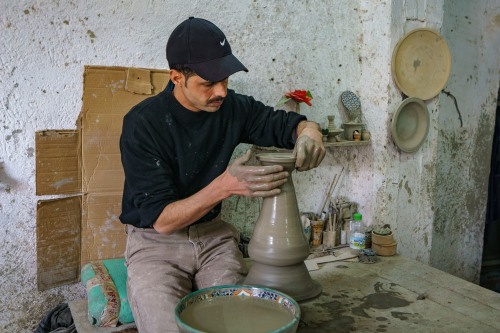 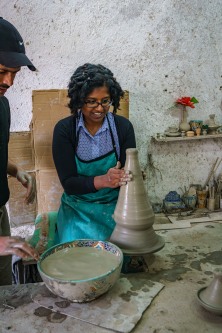 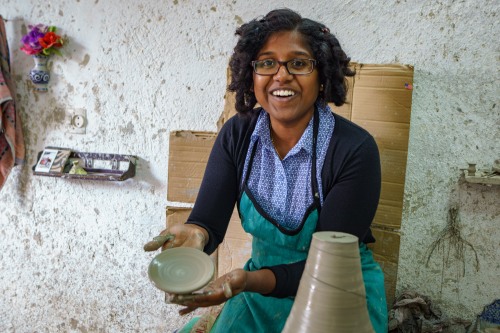 I made a plate!

5. I went for hammam and massage – hammam is kind of like a scrub with really hot water and a loofah that feels like sandpaper. Basically, it scrubs off all of your dead skin. Apparently Moroccan women do it once a week at home, or at the public hammams. It was a really interesting experience, I felt like I had been rubbed raw by the end of it though. The massage was really nice, with argan oil. One experience was enough. 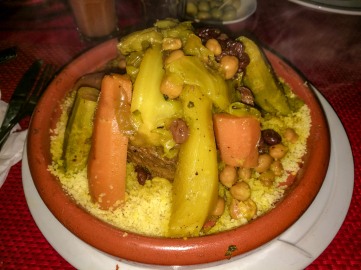 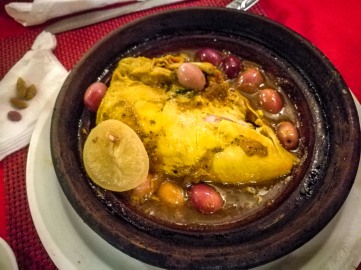 3. Famille Restaurant Berrada – this was really a treat, we walked into this restaurant and were immediately led to the kitchen, where the girl spoon-fed us the dishes of the day. We got to choose based on taste what we liked and then ordered the beef tagine to share. Good thing we didn’t order another dish, as they gave us free shish kebab and also free vegetable starters and bread. So much food for Dh70!! 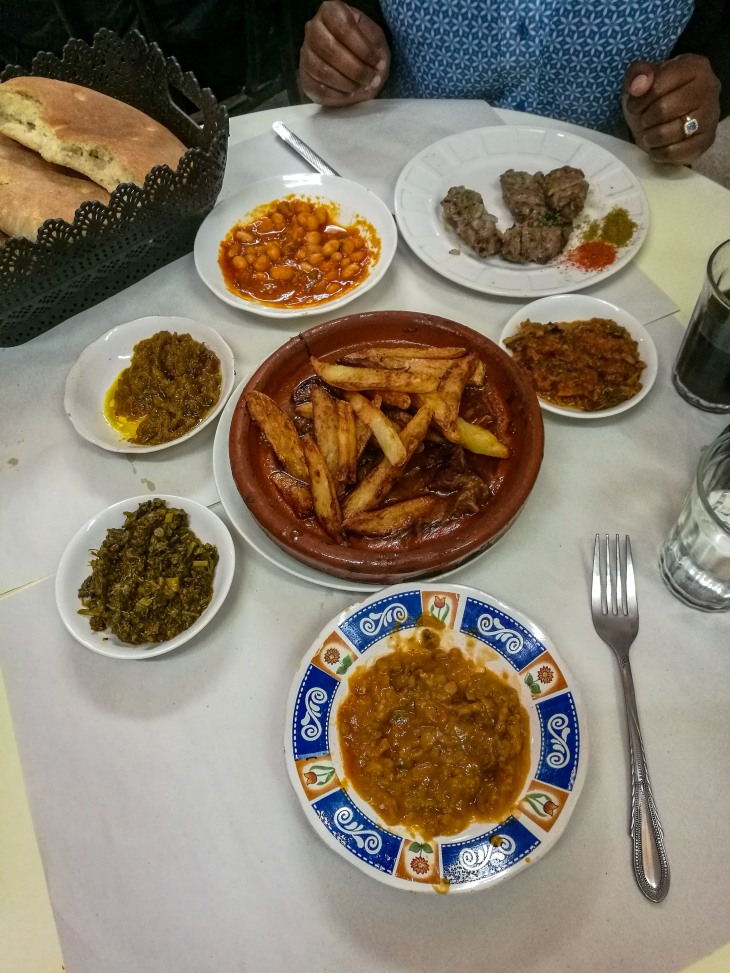 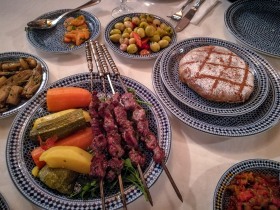